Black Cohosh is a perennial plant native to North America. It grows in rich, open woods and hillsides from Maine and Ontario to the southern United States. The stem is smooth and furrowed, and grows from three to nine feet in height. The leaves are ternate, then pinnate, and are irregularly shaped. There are two to five leaflets which are egg-shaped or oblong, and irregularly toothed and cut. Small white or yellow flowers grow in long racemes from June to August. The medicinal part is the rootstock, which is the underground portion of a stem producing leaves from its upper surface and roots from its lower surface. It is often thick and contains deposits of reserve food material. 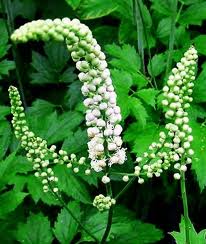 A compound recently identified in black cohosh (fukinolic acid) was shown to have estrogenic activity in vitro. Other active compounds appear to include triterpene glycosides (including actein and cimicifugoside), resins (including cimicifugin), and caffeic and isoferulic acids .

There has been some research in women who are past menopause and take a black cohosh product called Klimadynon or Menofem. These products might lead to improved bone formation. However, bone formation is only part of the larger picture related to weak bones or osteoporosis. Bone material is constantly being broken down and rebuilt by the body. Some black cohosh products can lead to increased bone formation, but the newly formed bone may not be as strong as desired. Researchers often look to see whether the persons taking a particular product have fewer fractures over a period of time. They also look to see which bones break the most. For example vertebrae and leg bones may be affected differently. It is not known if black cohosh decreases the chance of developing weak bones or if it prevents bone fractures.

Black cohosh has also been tried for a lot of additional uses, such as anxiety, rheumatism, fever, sore throat, and cough, but it is not often used for these purposes these days.