A honeysuckle is a plant that can range from a vine to a shrub. There are around one hundred eighty different varieties of honeysuckle. Some of them are deciduous and some are evergreen. Many of the deciduous honeysuckle can also be evergreen in warmer climates. The height of a mature honeysuckle varies by species, but usually ranges from one to three feet tall. The hardiness of a honeysuckle plant also varies by species, with most hardy in zones five through eight. Honeysuckle contains calcium, magnesium, potassium, vitamin C, Rutin, a nutrient that enhances the effectiveness of vitamin C, and Quercetin, an acid that fights free radicals. ebiochem.com

Honeysuckle is one of the oldest medicinal herbs in known history. Sometimes referred to as woodbine, European honeysuckle was once used widely to treat urinary complaints, asthma, and during childbirth. 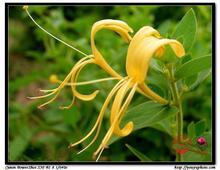 Moreover, honeysuckle can be used to treat skin rashes, such as poison oak, cuts and abrasions on the skin. Honeysuckle stems are the preferred part of the plant to use in the treatment of skin care. ebiochem.com

It has been a long history that honeysuckle used in the civil, but may be there is more usage waiting to be discovered. ebiochem.com