Theanine is a compound found in tea leaves, especially green tea, and in a few species of mushroom. The type of theanine recognized by your body and able to cross the blood-brain barrier is L-theanine. L-theanine can promote relaxation and calmness, much like the herb chamomile, but it’s not found in any part of the chamomile plant. L-theanine and chamomile are sometimes found together in natural sleep-promoting supplements. Ask your doctor how chamomile and L-theanine may help if you have chronic difficulty getting to sleep. 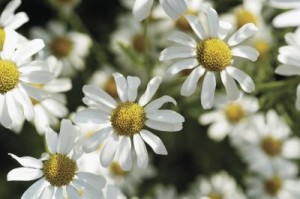 Chamomile tea is not made from tea leaves, or Camellia sinensis. Instead, chamomile tea is actually a hot herbal infusion made by steeping the flowers of the chamomile plant in hot water. Unlike black and green teas, herbal infusions such as chamomile do not contain L-theanine or caffeine, according to “Principles and Practice of Phytotherapy: Modern Herbal Medicine.” Chamomile flowers are mild and slightly bitter tasting, which is why honey and other natural sweeteners are often added to chamomile tea. The flowers are also used medicinally, and they are sometimes applied to mild skin abrasions and inflammations.

Chamomile is best known as a sleep aid, especially for insomnia, because it displays calming effects in the brain. Specifically, chamomile contains a compound called chrysin, which is a bioflavonoid that induces relaxation and sleepiness. Chamomile also acts as a mild anti-inflammatory, antimicrobial, diuretic and muscle relaxant. Due to its calming effects, chamomile is usually consumed at night, just prior to bedtime, although its diuretic properties can lead to late-night trips to the bathroom.

L-theanine is not technically an amino acid, but it acts much like the amino acid glutamate. It crosses the blood-brain barrier and causes psychoactive changes. L-theanine is able to reduce stress, improve cognition and balance mood, according to the “PDR for Herbal Medicines.” Specifically, L-theanine increases levels of GABA and dopamine, which are both neurotransmitters in the brain that are linked to good mood. In a unique way, L-theanine combines the alertness caused by caffeine with the relaxation caused by herbs such as valerian root or chamomile flowers. Concentrations of L-theanine in green tea are up to five times higher than in black tea leaves. In animal studies, even extremely high doses of L-theanine cause few if any side effects.

Chamomile doesn’t contain L-theanine, although the two compounds are sometimes found together in supplements that are marketed as natural sleep aids. Chamomile and L-theanine both promote calmness and relaxation, although chamomile triggers sleep while L-theanine promotes concentration. L-theanine combats the negative effects of caffeine, mainly sleep disruption, which is why many people prefer drinking tea in the evening instead of coffee. If you are looking for a natural sleep aid, try drinking chamomile tea first, before combining it with any other compounds. Ask a naturopath about other natural sleep aids, such as valerian root and melatonin.