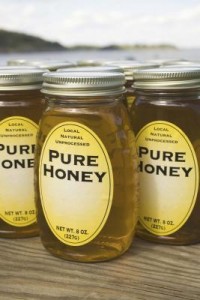 Honey is more than a sweet treat to eat — it might also work well to treat skin wounds and infections such as boils. Boils develop when the bacteria or fungi enter the skin around a hair follicle. Boils resemble pimples but often grow larger as they go deeper into the skin. Boils can make you feel ill. Never apply regular honey to a boil without your doctor’s approval.

Honey works in several ways to kill bacteria. Because honey is acidic, bacteria can’t survive well in it. Honey’s high sugar content draws fluid out of the microbes, dehydrating them and causing them to die. All honey might not be equal when it comes to antimicrobial action, or the ability to kill germs, however. The antibacterial properties of different types of honey can vary as much as 100- fold, according to an October 2008 “U.S. News and World Report” article. Manuka honey, produced mainly in New Zealand, contains compounds with a particularly high ability to kill bacteria, according to a June 1999 report in the “Journal of the Royal Society of Medicine.”

Honey has several benefits over antibiotics for treating wounds such as boils. When taken by mouth, antibiotics can cause stomach upset, including nausea and diarrhea. Antibiotics are also common sources of allergic reactions, which can cause life-threatening symptoms such as throat swelling, in some cases. Bacteria such as staphylococcus aureus, the bacteria most often responsible for causing boils, according to MedlinePlus, often become resistant to antibiotic treatment. Honey applied externally to wounds does not have these negative effects.