Diet can have a profound affect on how we age. The basic ingredients of a healthy, anti-aging diet are not too surprising: a wide variety of fresh fruits and vegetables, some protein, and a small dose of healthy fats. Beyond that, however, there are some foods that exhibit truly remarkable anti-aging properties. 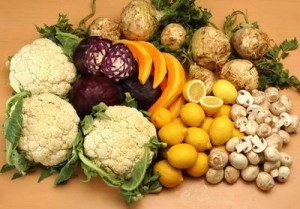 Blueberries contain vitamins C and E as well as antioxidants called anthocyanins which are known to neutralize free radicals and provide support to the cardiovascular system, the eyes and the digestive system.
In a 1999 study at the Jean Mayer Human Nutrition Research Center on Aging at Tufts University, rats that were fed blueberries in addition to their regular chow scored better on tests of balance and coordination as they aged. In a study at the University of Michigan, after 90 days of eating blueberries, rats had better insulin sensitivity and lower fasting blood sugar–important indicators of a reduced risk for diabetes, one of the most common diseases of aging. A University of Reading and Peninsula Medical School study showed that rats that ate blueberries had less cognitive decline with aging as well.

Olive oil’s protective qualities for both the heart and in regard to cancer come from polyphenols, which are powerful antioxidants. These findings have been reported in The Journal of Nutrition and the European Journal of Cancer Prevention, among others.
In addition to other benefits, a Journal of the American College of Nutrition study suggested olive oil and other Mediterranean diet staples may be connected to less wrinkling of skin.

Green tea is another food loaded with antioxidants, including vitamin C, vitamin E, lutein, zeaxanthin and catechins. As reported in The Journal of Nutrition, Cancer Prevention Research and elsewhere, a growing number of studies indicate that it has some protective effects in regard to certain cancers as well as liver damage.
A study reported in the Journal of Agricultural and Food Chemistry suggests that green tea antioxidants called catechins travel to the tissues of the eyes where they may reduce oxidative stress for up to 20 hours. A German study improved the effects of LED skin treatments for wrinkles by adding a lotion made of green tea extract.

The results from numerous studies have been reported in Carcinogenesis, Nature and Clinica Chimica Acta: the International Journal of Clinical Chemistry. Red wine contains several antioxidants, including a polyphenol called resveratrol that may help ward off age-related illnesses. In one study, resveratrol appeared to prevent cancer by limiting tumor growth in rats. In another study, resveratrol extended the lifespan of mice on a high-calorie diet. http://www.ebiochem.com/