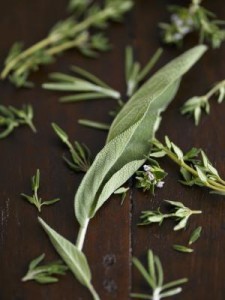 Excessive sweating, clinically known as hyperhidrosis, is characterized by profuse sweating of the face, feet, underarms or, most commonly, the palms. Aside from discomfort, this condition can have significant emotional and social impact for some people. In severe cases, treatment typically consists of thoracic sympathectomy, which involves the removal or resecting of sympathetic nerves. However, mild cases may respond to therapy with sage extract. Explore all of your treatment options with your doctor, though, and note that this herb is not suitable to use during pregnancy or lactation.

According to the “Physicians’ Desk Reference for Herbal Medicines,” the active compounds in the volatile oils obtained from the leaves and aerial parts of the sage plant consist of a 20 to 60 percent concentration of alpha-thujone and beta-thujone, and lesser amounts of 1,8-cineole, linalool, rosmarinic acid and several other phytochemicals. Collectively, these agents exert astringent, antibacterial, antifungal and antihydrotic effects, the latter meaning to inhibit perspiration. Using sage to treat excessive sweating due to various causes, including clinical hyperhidrosis, is a traditional remedy with a long history. Today, the German Commission E, the European equivalent of the U.S. Federal Drug Administration, approves the use of sage extracts to treat excessive sweating.

Excessive perspiration isn’t always blamed on a condition like hyperhidrosis. In fact, a common and similar event is often experienced during menopause in the form of hot flashes. As the term implies, hot flashes are described as a sudden flushing of the skin followed by profuse sweating, usually about the face and torso. In herbal medicine, sage is a traditional treatment for hot flashes, sometimes in combination with other herbs.

Sage is also traditionally used to reduce the frequency of night sweats, another symptom associated with menopause. Of course, unlike hot flashes, night sweats occur exclusively during sleep. In addition, according to a monograph provided by the Plants For A Future Organization, sage is used to counter excessive nighttime perspiration triggered by symptoms of tuberculosis, such as persistent cough and fever.

In a review published in the May-June 2002 issue of the “European Journal of Dermatology,” Barbara Togel and colleagues wrote that drinking at least 1 liter of sage tea per day sometimes helps to reduce excessive sweating caused by localized and generalized forms of hyperhidrosis. In addition, the practice is a suitable adjunctive therapy to conventional treatments for excessive sweating and a non-invasive alternative to surgical procedures.