Pasalai keerai is spinach. It is used in various Indian recipes, usually cooked with added spices and vegetables. India has a number of keerai or “greens” that are used in traditional meals and for their health benefits. Spinach is called pasalai keerai in Tamil, the Dravidian language spoken in parts of India. Pasalai keerai is a dark green leafy vegetable that is high in nutritional content.

Pasalai Keerai is low in calories and packs protein and fiber. One cup of cooked, boiled and drained spinach contains only 41 calories and a full 5.3 grams of protein and 4.3 grams of dietary fiber. According to the U.S. Dietary Reference Intakes Guide, protein serves as the basis for the structural components of all cells. During digestion, proteins break down into amino acids that are used at the cellular level. The daily recommended amount of protein is based on age and sex. Children ages 3 to 8 need approximately 13 to 19 grams of protein daily, while ages 9 to older than 70 need 34 to 56 grams of protein. Fiber is helpful for a healthy bowel and reduces the risk of heart disease, diabetes and diverticulitis, according to Harvard School of Public Health. 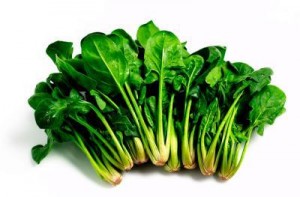 Spinach was promoted by early TV cartoons such as “Popeye,” who gained his strength from eating a can of spinach. It is known to be a good source of iron, containing 6.43 milligrams per one cup of cooked spinach. The estimated Dietary Reference Intakes set by the U. S. Food and Nutrition Board is approximately 5 to 8 milligrams of iron per day based on your age and sex. It is also high in other minerals: 245 milligrams of calcium, 157 milligrams of magnesium, 101 milligrams of phosphorus, 839 milligrams of potassium and 1.37 milligrams of zinc in one cup of cooked spinach. Calcium-rich foods are the best way to make sure you are getting enough calcium. According to the Mayo Clinic, calcium is necessary for bone strength throughout your life. It is also helpful for muscle spasms. Potassium is an electrolyte in your body needed for cellular health, metabolism, tissues and organs. It assists in protein synthesis, muscle growth and is necessary for a normal electrical activity in the heart muscle. The University of Maryland Medical Center notes that it is an important mineral in the human body.

Pasalai keerai spinach is rich in vitamins, especially vitamins A and K. One cup of cooked spinach supplies 943 micrograms of vitamin A and 888.5 micrograms of vitamin K. It is also a good source of the B vitamins: thiamin, riboflavin, niacin, B-6, folate and B-12. According to the Harvard School of Public Health, vitamin A helps in the production of white blood cells and regulates cell growth and development. Vitamin K helps your blood clot properly and also assists in keeping your bones strong.