Horsetail, botanically known as Equisetum arvense, has been traditionally employed as a diuretic and astringent. Drugs.com credits it with possible antioxidant properties, and notes its use as an herbal treatment for urinary tract problems. Silicon, also called silica and silicon dioxide, occurs naturally in the body in bones, tendons and skin; it appears in the bloodstream in the form of orthosilicic acid. The University of Maryland Medical Center notes that because horsetail contains silicon, a mineral required for bone health, it has been recommended in the treatment of osteoporosis, a disease that causes the thinning of bones; however, more studies are needed to determine its effectiveness. The Institute of Medicine reports that there is no recommended dietary intake for silicon; most people consume between 20 and 40 milligrams a day. According to a study published in 2002 in the “American Journal of Clinical Nutrition,” beer, bananas and string beans are the main dietary sources of silicon for adults. 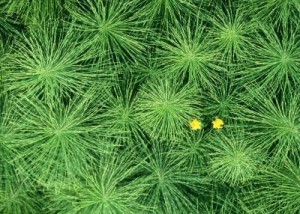 Experts disagree on the safety of horsetail, which is available in capsules standardized to contain 10 to 15 percent silica. According to the UMMC, horsetail is safe when used properly, but should not be taken over prolonged periods of time. Drugs.com, however, reports that horsetail is no longer considered safe due to its content of thiaminase, which destroys vitamin B-1 in the body. Manufacturers are required to provide documentation of thiaminase removal. If you take horsetail, the UMMC recommends taking B-complex vitamins as a precaution. You should purchase horsetail only from a reputable supplier, as Equisetum palustre, a related variety, contains toxic alkaloids. You shouldn’t use horsetail if you drink alcohol regularly or have heart or kidney problems, diabetes or gout. Pregnant and breastfeeding women, as well as children, should not take horsetail. Consult your doctor before using this supplement.

According to Biosilusa.com, the ch-OSA in BioSil activates pathways that generate collagen, thus helping to prevent the formation of wrinkles. The manufacturers also claim that BioSil stimulates production of elastin, which gives skin its pliancy, as well as keratin, a key constituent of hair and nails. Choline, an essential nutrient that helps maintain cell membrane integrity, is also found in BioSil. In a placebo-controlled clinical study published in 2005 in “Archives for Dermatological Research,” 50 women with photoaged skin who were given 10 milligrams of ch-OSA a day for 20 weeks experienced significant improvements in skin texture and elasticity over women who did not received the supplement. In a study published in 2007 in the “Archives for Dermatological Research,” researchers found that 48 women with fine hair who were given 10 milligrams of ch-OSA a day for nine months had hair that was less susceptible to breakage than that of the control group.

According to NYU Langone Medical Center, a study published in 2005 in the “Archives for Dermatological Research,” indicating ch-OSA’s benefits for skin, hair and nails, did not meet the highest standards of design and reporting. In addition, both the ch-OSA study published in 2005 and the one published in 2007 were supported by a grant from Bio Minerals, n.v., the manufacturer of BioSil. Independent research on ch-OSA’s cosmetic benefits is lacking. In addition, BioSil — as well as horsetail — can be costly. Most nutritionists advise consuming silicon naturally by eating a diet rich in fibrous foods such as leafy greens, beans, bananas, root vegetables, celery and cucumbers.