Stevia, otherwise known as Stevia rebaudiana, is known worldwide for its sweet plant leaves. In late 2008 the FDA declared that the sweetener Stevia is “generally recognized as safe,” and the product quickly was assimilated into the food industry as an alternative sweetener or sugar substitute. Crude Stevia comes from the sweet leaves of the Stevia plant and can be sold in a variety of forms including the leaves themselves, a green, less sweet herbal powder, a refined, sweet white powder extract as well as in a liquid form. According to Mintel, a leading market research company, Stevia sales could reach $2 billion in 2011.

Identification of the Sweetener from the Leaves

The term Stevia refers to the entire plant, but only part of the plant happens to be sweet. It is a member of the sunflower or Asteraceae plant family and is naturally found throughout more tropical areas in North and South America such as Paraguay and Brazil. The sweetener Stevia is made by isolating the sweet parts of the leaf, called steriol glycosides, by steeping the leaves as if making a tea. According to Agarwal, et.al., Stevioside and Rebaudioside A are the main sweet components of Stevia: the higher concentration of Rebaudioside A, the better the level of sweetness since it is the sweetest and best part of the combination. 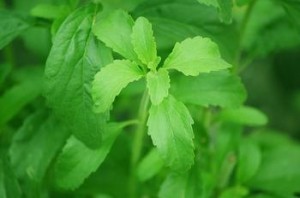 According to Stevia.com, the crude Stevia leaves and the green herbal powder are 10 to 15 times sweeter than table sugar. The white powder sold more commercially is a more refined product and it is much sweeter. In fact, this purified and concentrated white powder has been recorded to be 200 to 300 times sweeter than table sugar. Stevia can be somewhat bitter to some people, however, and others believe that it tastes similar to licorice. Stevia has no calories and, according to the Mayo Clinic, research appears to demonstrate that Stevia does not raise blood glucose levels in sensitive people.

Types of Food That Contain Stevia

Stevia can be found in many commercial food products under a variety of names. Coca-Cola uses it in its beverages and calls it Truvia. PepsiCo calls its product PureVia. Stevia, or a form of it, can be found in some sugar-free Wrigley’s gums, Beatrice Foods yogurts, Japanese-style pickles and some candies.

According to Anton, et.al., sugar-sweetened foods may have a significant impact on obesity. The researchers found that people did not over compensate for the missing calories when they consumed Stevia over sugar. Since Stevia does not have an impact on blood sugar levels, and, in fact, that it may have hypoglycemic effects, it may be useful in the treatment of diabetes. According to Ulbricht, et.al., two long-term studies appear to show that stevia may lower blood pressure in some people with high blood pressure but this is necessarily supported by shorter studies. Most of the research on blood pressure have been conducted in China. As a food additive, it appears that Stevia is stable in cooking and with acidic foods, but does not “caramelize” when browned.

There has been some concern about minor GI effects, headaches and dizziness with Stevia. In addition, some studies have commented about purity and toxicity concerns. Mixing Stevia with sugar alcohols may have a laxative effect. Pregnant women, diabetics and those with high blood pressure should avoid using Stevia due to possible side effects. While the Japanese have studied Stevia and consider it a safe product for the general population, caution regarding frequency of use for certain populations should be considered.