Known as an arctic root, Rhodiola rosea grows in the arctic regions of Europe and Asia. Rhodiola extract may help balance the body due to its adaptogenic properties. Adaptogens are natural substances that help the body cope with physical, mental and/or emotional stress. Add rhodiola to your diet and supplement program to experience its health benefits. 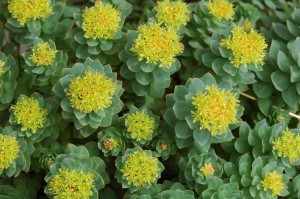 Chronic stress levels can be very harmful and may lead to the development of type 2 diabetes, heart disease and obesity, according to “The Cortisol Connection” by Shawn Talbott. The author recommends rhodiola, which improves the body’s physiological response to stress.

Rhodiola may have nervous system health benefits. Acting as an antioxidant for the brain, rhodiola may prevent oxidative effects that can damage cells. The benefits may manifest as improved memory and cognitive function, according to “Rhodiola: Nature’s Energy Booster” by Pete Croatto.

Rhodiola may improve physical endurance. According to the Life Extension Foundation, only 200 mg of rhodiola improves exercise capacity in healthy adults. Rhodiola may improve endurance and make exercising feel easier, giving you a caffeine-like boost without the harsh stimulant properties.

Evidence from animal studies published in the December 2003 issue of “Bulletin of Experimental Biological Medicine” (cited by the Life Extension Foundation) concluded that the effect of extracts from rhodiola rosea on ATP content in mitochondria of skeletal muscles may promote healthy blood sugar levels. Taking rhodiola may correct hypoglycemia and help to prevent type 2 diabetes.

Despite the fact that most people take rhodiola for energy, it may improve sleep as well. In an animal study published in the October 2000 issue of the journal “Phytomedicine” and cited by Life Extension Foundation, rhodiola reduced sleeplessness in test subjects, allowing mice to sleep longer and more restfully.