Cinnamon extract may be a useful tool if you are trying to lose weight—especially if you are obese, have metabolic syndrome or suffer from diabetes or prediabetes. However, you need to check with a doctor before adding cinnamon extract to your regimen because it can have side effects such as acting as a blood thinner. As of 2010, research on the spice’s weight-loss effectiveness was still ongoing.

Supplementing with cinnamon extract can result in increased lean muscle mass and slight body fat decreases, says a study published in the “Journal of the International Society of Sports Nutrition.” The study looked at the impact that cinnamon extract had on 22 people who had metabolic syndrome. If you have metabolic syndrome, you have a waist circumference that is too big, high triglyceride levels, elevated fasting blood sugar levels and high blood pressure. Some 26 percent of adults in America, or more than 50 million people, have this condition, which triples risk for cardiovascular disease and is associated with five times the risk for type 2 diabetes. 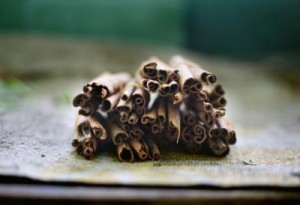 Using cinnamon can lower a meal’s glycemic effect, says Lucy Beale and Joan Clark, authors of “The Complete Idiot’s Guide to Glycemic Index Weight Loss.” That means the foods you consume will boost your blood sugar more slowly. When your blood-sugar levels are elevated, your body releases more insulin, which transports the sugar in your blood, or glucose, to tissue cells so it can be used for energy. It also transports any extra glucose into fat storage. When a spike in blood-sugar causes a spike in insulin this translates to more fat being stored.

Cinnamon extract supplements cause significant decreases in fasting blood glucose, the study says, which suggests it may reduce risk factors that are associated with diabetes. Diabetes is often linked to obesity-induced insulin resistance. When you end up with more fat cells and fewer muscle cells, your levels of glucose and insulin stay elevated. Elevated levels of visceral fat, meaning belly fat, are linked to extra fat storage in your liver, which may in turn raise your blood sugar levels. If your waist is larger than your hips, chances are you are on the path to insulin resistance, notes Janet Sanders, author of “The Diabetes Coach Approach Workbook.” In fact, the more overweight you are, the worse your insulin resistance becomes.

A substance called flavon-3-ol is thought to be responsible for cinnamon extract’s stabilizing effect of insulin on your blood sugar. Flavon-3-ol, an antioxidant, may decrease insulin resistance in a couple of ways, notes Nicholas Perricone in his book, “The Nicholas Perricone Weight-Loss Diet.” The antioxidant activates enzymes that stimulate your insulin receptors, which is important because when you are insulin resistant, your cells lose the ability to sense the presence of insulin. It also enhances insulin-signaling pathways within your muscle tissue. Cinnamon’s active components are found in the water-soluble portion of the spice rather than the fat-soluble cinnamon oil, Perricone notes.

More study on cinnamon’s potential as a weight loss aid is needed, as not all studies point to a benefit. For example, some studies find cinnamon extract has no effect on insulin resistance. The best dosage of cinnamon extract also needs to be identified, Perricone says. For example, the U.S. Department of Agriculture findings point to lower doses of cinnamon proving more consistently effective for blood sugar control.