In addition to the vitamin A and fiber it supplies in abundance, broccoli contains an unusual compound — sulforaphane — that may reduce your risk of certain types of cancer, lower your cholesterol and combat ulcer-causing Helicobacter pylori bacteria in your digestive system. Broccoli extract may come either from adult plants or from sulforaphane-rich broccoli sprouts. Researchers are still investigating the properties of sulforaphane in broccoli extract, but early results are promising.http://www.ebiochem.com/

The journal Cancer Research reported in 2008 that concentrated extract from broccoli sprouts halved the incidence of bladder tumors in an animal study. The University of Michigan’s Comprehensive Cancer Center found in 2010 that sulforaphane from broccoli extract “killed the cancer stem cells and prevented new tumors from growing” in cell cultures and in animal tests. While the research on broccoli extract’s anti-cancer properties is not yet conclusive, it’s possible that sulforaphane could give doctors a new weapon in the fight on bladder and breast cancer. Broccoli extract cannot replace regular screening and treatment for cancer; it’s vital to maintain your doctor’s recommended schedule for screenings.http://www.ebiochem.com/ 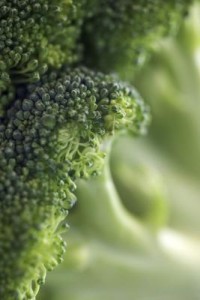 Protection From Skin Damage Due to Ultraviolet Radiation

If the report to the Proceedings of the National Academy of Sciences from Johns Hopkins researchers is any indication, then sulforaphane may help prevent skin damage, including skin cancers, resulting from ultraviolet radiation. Topical applications of broccoli extract to animals and to human volunteers caused skin cells to step up production of enzymes that help the cells combat the damaging effects of solar radiation. Unlike sunscreens, broccoli extract appears to encourage your body’s own defense system’s function. However, the participants in the experiment showed a large variation in the degree of protection they got from the extract, so traditional sunscreens remain your safest choice for sun protection.

The pathogen responsible for stomach ulcers, Helicobacter pylori, is susceptible to antibiotic treatment. Broccoli extract may have a similar antibiotic effect on the microbe, according to a small study published in Cancer Prevention Research. Participants in the study ate broccoli sprouts rather than receiving broccoli extract, but those who ate the sprouts showed a 40 percent reduction in compounds produced by H. pylori, suggesting that the sprouts killed off a portion of the bacteria. A control group who ate no sulforaphane-rich broccoli sprouts showed no change in their H. pylori levels.