Cultivated throughout sub-Saharan Africa, trees of the kigelia africana and kigelia pinnata species yield a large sausage-size fruit that the region’s indigenous people have long used for medicinal and cosmetic applications. Many cosmetic companies have acknowledged the fruit’s skin-enhancing properties through the addition of fruit extract to some of their products. Medical research has also uncovered evidence that kigelia fruit extract may be effective in helping to treat melanoma, the deadliest form of skin cancer.

Following up on studies that showed the stem bark of the kigelia africana possessed potent antibacterial properties, a team of South African researchers conducted a study to see if the kigelia fruit offered those benefits as well. They prepared crude extracts of both stem bark and fruit using distilled water, ethanol or ethyl acetate. Researchers then tested the extracts against gram-negative and gram-positive bacteria. In a report on their findings in a 2002 issue of the “South African Journal of Botany,” they reported stem bark and fruit extracts showed significant antibacterial activity against both strains of bacteria. These findings have paved the way for the use of kigelia extract in skin-cleansing agents and other products designed to combat bacterial skin infections. 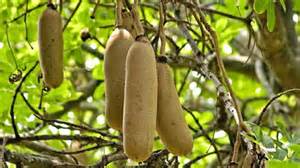 A five-member Indian team of scientists undertook a review of the scientific literature covering studies into kigelia’s medicinal and cosmeceutical properties. In their report, published in a 2009 issue of “Natural Product Radiance” — known in 2011 as the “Indian Journal of Natural Products and Resources” — they cited studies that found kigelia’s active ingredients include steroidal saponins and the flavonoids luteolin and quercetin. These phytochemicals help strengthen and stabilize the collagen fibers that support the skin, thus having a firming effect. Some studies found that the extract was particularly effective in firming the skin in and around the breasts.http://www.ebiochem.com/

Researchers in Northern Ireland conducted an in vitro study to assess the ability of various compounds from the kigelia pinnata fruit to halt the spread of human melanoma cells. Part of the impetus for the study was the traditional use of the fruit by folk healers to treat skin cancer and other skin disorders. Scientists isolated several compounds from the kigelia fruit and tested them against melanoma cells in the lab. They found significant anti-cancer properties from a variety of kigelia compounds, including the isocoumarins demethylkigelin and kigelin; oleic and heneicosanoic fatty acids; ferulic acid; and the furonaphthoquinone 2-(1-hydroxyethyl)naphtho[2,3-b]furan-4,9-dione. In their findings, published in a 2010 issue of “Planta Medica,” researchers noted that the furonaphthoquinone was also effective in vitro against two strains of breast cancer cells.

In its review of the literature covering kigelia’s cosmeceutical applications, the authors of the 2009 “Natural Product Radiance” article reported kigelia was already widely used as an active ingredient in a variety of cosmetic formulations. These products can give skin a smoother appearance by reducing fine lines and wrinkle depth. They also are believed to promote skin elasticity, naturally lighten pigmentation, reduce blemishes and increase circulation to the skin.http://www.ebiochem.com/