Noni fruit, also known by the scientific name “Morinda citrifolia,” is grown in tropical climates such as the Polynesian Islands, northern Australia, Puerto Rico and the U.S. Virgin Islands. The Aug. 1, 2001, issue of the medical journal American Association for Cancer Research states that the noni fruit has been used for centuries by Pacific islanders for its health benefits. The noni is not often eaten as a fruit, as it is bland and has an unpleasant smell. It is most often consumed as a fruit juice, although parts of the fruit, such as the leaves and the pulp, are also known to have healing benefits.

Noni juice is shown to provide protection against the development of cancer. A study in the December 2001 issue of the Annals of the New York Academy of Sciences pointed out that noni juice prevented the formation of cancer cells and attributed this action to its high antioxidant power. The Memorial Sloan-Kettering Cancer Center in New York echoes this claim, stating that there are many reports of studies, done in vitro (outside of a living environment) and in animals, that show noni extract exhibits anti-tumor properties. 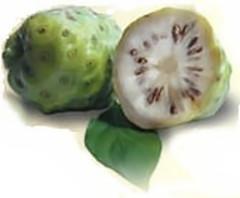 Noni juice was also the subject of a study reported in the June 2008 journal of Plant Foods for Human Nutrition. In this study, rats were exposed to liver damaging toxins, but the rats that were pretreated with noni juice showed a much lower level of liver damage from the exposure. On the flip side, a report from Colorado State University in 2007 states that in 2005 there were three cases of liver injury reported, and all were said to have been influenced by noni juice. (Two of these cases were reported in a 2005 issue of the World Journal of Gastroenterology and the other case was reported in a 2005 issue of European Journal of Gastroenterology & Hepatology.) While the more recent research shows protective effects of noni juice on the liver, if you currently have liver damage, speak to your physician before consuming noni juice.

Puree made from the pulp of the noni fruit was tested on the pain threshold in mice, and, as reported in the June 22, 2009, issue of Phytotherapy Research, it was found to have a pain-relieving effect. The conclusion of this study, performed by researchers at the University Clinic in Hamburg, Germany, is that extracts of the noni fruit can relieve pain and reduce the amount of joint destruction caused by inflammation of arthritis. Another study reported in the Feb. 12, 2008, issue of the Journal of Ethnopharmacology showed that noni juice, when tested in vitro and in mice, showed an increase in immune system response. This is of importance to those who have a compromised immune system, due to illness or other medical conditions.