As part of the reproductive process of flowering plants, each flower’s stamen, the male actor in this process, produces a sticky powder called pollen. Pollination occurs when pollen is moved–through whatever means–to the flower’s stigma, located at the top of the flower’s female component called the pistil. While the process itself may be of interest only to students of botany, flower pollen offers significant nutritional benefits for humans.

Although the precise makeup of pollen varies from flower to flower, almost all types of pollen contain a rich mix of amino acids, vitamins and minerals, according to Elson M. Haas and Buck Levin, authors of “Staying Healthy with Nutrition.” They point out that the major component of bee pollen, long prized for its medicinal properties, is the pollen that the hard-working insects collect from a wide array of flowers. In addition to its rich stores of vitamins, minerals and amino acids, flower pollen also contains high levels of phytonutrients, which have been the focus of increased attention by medical researchers. Among pollen’s many phytonutrients, Haas and Levin say that flavonoids, including luteolin, myricetin, quercetin and tricetin, may offer the greatest potential benefits for human users.http://www.ebiochem.com/ 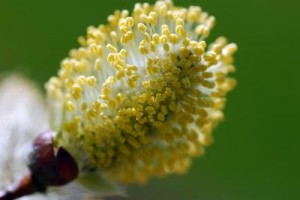 In a profile of flower pollen’s nutritional makeup, herbalist Michael Tierra points out that flower pollen contains more chemical constituents, a total of 22, than are found in any other botanical product. “The more important of these,” he writes, “are ten amino acids, enzymes, and a string of minerals, including trace minerals, all known vitamins, antibiotic substances and steroid hormones.”http://www.ebiochem.com/

Contending that “no single food on Earth has more essential food factors,” pharmacist Phillipe Moser reports that flower pollen supplements have helped a number of world-class athletes to improve their energy level and physical performance. In an article on the Insiders Health website, Moser cites an Italian study that examined the effects of micronized flower pollen on members of nine different Italian soccer teams. They found that athletes taking the flower pollen supplements for only 10 days increased energy levels by 70 percent, boosted stamina by 163 percent and more than doubled essential oxygen intake.

Preliminary studies indicate that flower pollen may be effective in treating prostate gland disorders, including prostatitis and benign prostate hyperplasia, or BPH, a noncancerous enlargement of the gland. In “100 Super Supplements for a Longer Life,” author Frank Murray cites a study at the University Hospital of Wales in Cardiff that produced promising results. Fifty-three men, ranging in age from 56 to 89 and awaiting surgery for enlarged prostate, were divided into two groups. Members of one group were given two capsules of flower pollen extract twice daily, while the other group received a placebo. At the end of six months, members of the group getting the flower pollen showed a 69 percent improvement in symptoms, compared with only 29 percent among members of the control group.