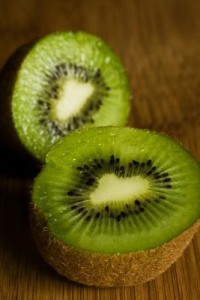 Which little fruit has more vitamin C than an orange and as much potassium as a banana? If you said a kiwi, you guessed correctly. The plentiful vitamins and minerals in a serving of kiwi support overall good health and may also help treat specific conditions such as asthma and age-related macular degeneration. In addition, the tiny, black, edible seeds are chock full of nutrients.http://www.ebiochem.com/

Kiwi, or kiwifruit, originated in China, and found its way to the Western world in the 20th century. Also called “Chinese gooseberry,” kiwi grows on shrubby vines, and has more in common with berries and grapes than with tree fruits. The bright green flesh is buttery-soft in texture, and tastes sweet and tart at the same time. Both the skin and the seeds are edible, although most people remove the fuzzy skin and discard it. A golden variety of kiwi first appeared in 1991, and is nutritionally similar to its green cousin.

A cup of sliced green kiwi supplies 167 g of the antioxidant vitamin C, or about 150 percent to 200 percent the recommended daily value for an adult. The 562 mg of potassium in a cup of kiwi assists with the function of all your body’s cells and organs, and is about 12 percent of the recommended daily value. The high vitamin C and potassium content contribute to this fruit’s respiratory health benefits. Kiwi also supports eye health, due to 157 IU of vitamin A in a 1-cup serving, and 220 mcg of lutein, a carotenoid that protects against macular degeneration. This powerful little fruit is a significant source of vitamin K as well, which boosts bone density.http://www.ebiochem.com/

Less than 3 percent of the weight of a kiwi is in its tiny seeds. Like those of other berries, the seeds of the kiwi store nutrients for the plant’s cultivation, growth and survival, and as such are nutrient-dense. Although you discard the seeds and pits of tree fruits such as apples, oranges, cherries and plums, you can eat the seeds of kiwi. In addition, the oil extracted from kiwi seeds is richer than flaxseed in alpha-linolenic acid, an omega-3 fatty acid that promotes heart and brain health and helps regulate cholesterol. You can consume kiwi seed oil as a supplement. Because it is rich in vitamin A, this oil is sometimes a component in beauty products for skin and hair.

Although kiwi packs a nutritional punch, some people are allergic to it. Allergic reactions seem to be strongest in young children. Symptoms vary in severity, from mild oral irritation to hives to anaphylactic shock. Allergic response may be due to an enzyme in kiwi called actinidin.http://www.ebiochem.com/