Coffee is one of the world’s most popular stimulants and most widely consumed beverages. Only water and tea have higher overall consumption than coffee. Green coffee is simply coffee made from unroasted beans or raw coffee. According to Applied Foods.com, green coffee is extremely rich in chlorogenic acid. Chlorogenic acid is a powerful antioxidant that will rid your body of free radicals and promote good health. Consumption of green coffee and the associated chlorogenic acid offers some positive health benefits.

Consumption of green coffee can have a beneficial effect on hypertension. A study conducted by Kao Corporation in Tokyo, Japan, revealed positive effects on mild hypertensive cases in rats and humans. The research showed significantly decreased blood pressure in both humans and rats and that amount of blood pressure response was directly proportional to the dose of green coffee. The higher the dose of green coffee, the greater the effect on blood pressure. The study also revealed the positive changes were obtained without the risk of side effects that can be observed with prescription medication. 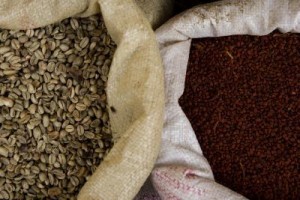 Research has shown that the consumption of green coffee can also be beneficial for diabetes. A study at Helwan University in Cairo, Egypt, and published in the “Journal of American Science” revealed the consumption of green tea decreased blood glucose levels and insulin levels in diabetic rats. The research concluded that the cholorogenic acid content of all coffee, not just green coffee, is responsible for the antagonistic effect on glucose transport in your body.