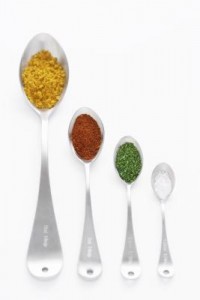 Curry powder is a mixture of spices, including turmeric, used to prepare curry dishes and other traditional recipes in Indian cuisine. Turmeric contains curcumin, the substance that gives the spice a bright golden color, which is known to have anti-inflammatory properties. You can get the health benefits of turmeric by using curry powder in foods or taking turmeric capsules, which are available in pharmacies and health food stores. Tell your doctor if you are planning to take turmeric in pill form. While there are numerous health benefits of curry powder, there are also some known side effects, including increased bleeding risk, MedlinePlus warns.

As a natural anticoagulant, turmeric can increase bleeding and slow blood clotting. If you are having surgery, stop using curry powder and turmeric at least two weeks before the scheduled operation. They also may interact with certain medications and should not be used in combination with blood thinners such as aspirin; clopidogrel, prescribed under the brand name Plavix; warfarin, prescribed as Coumadin; and others. Turmeric can increase bleeding when taken with anticoagulant drugs. Talk to your doctor about the possible adverse effect of curry on these medications.http://www.ebiochem.com/

The National Center for Complementary and Alternative Medicine reports that researchers have studied the active chemical compounds in turmeric and their anti-inflammatory effects in human cells. The anti-inflammatory action may be due to curcumin’s interaction with chemical messengers known as eicosanoids, which control the inflammatory response in the body. Curcumin has been shown to inhibit the activities of certain eicosanoid-producing enzymes in cultured cells. Because of its anti-inflammatory properties, curry powder and turmeric may be helpful in the treatment of rheumatoid arthritis, fibromyalgia and other conditions, although there is insufficient evidence to rate its effectiveness.http://www.ebiochem.com/

The curcumin in turmeric may hold powerful and promising anti-cancer benefits. A 2008 study published in the international medical journal “Cancer Letters” suggests that curcumin interferes with multiple cell signaling pathways that affect the life cycle of cancer cells. As a result, curcumin can fight off the onset and spread of cancer in the body. It is reported to be effective against many different types of cancer, such as leukemia, lymphoma, skin cancer, lung cancer and breast cancer.